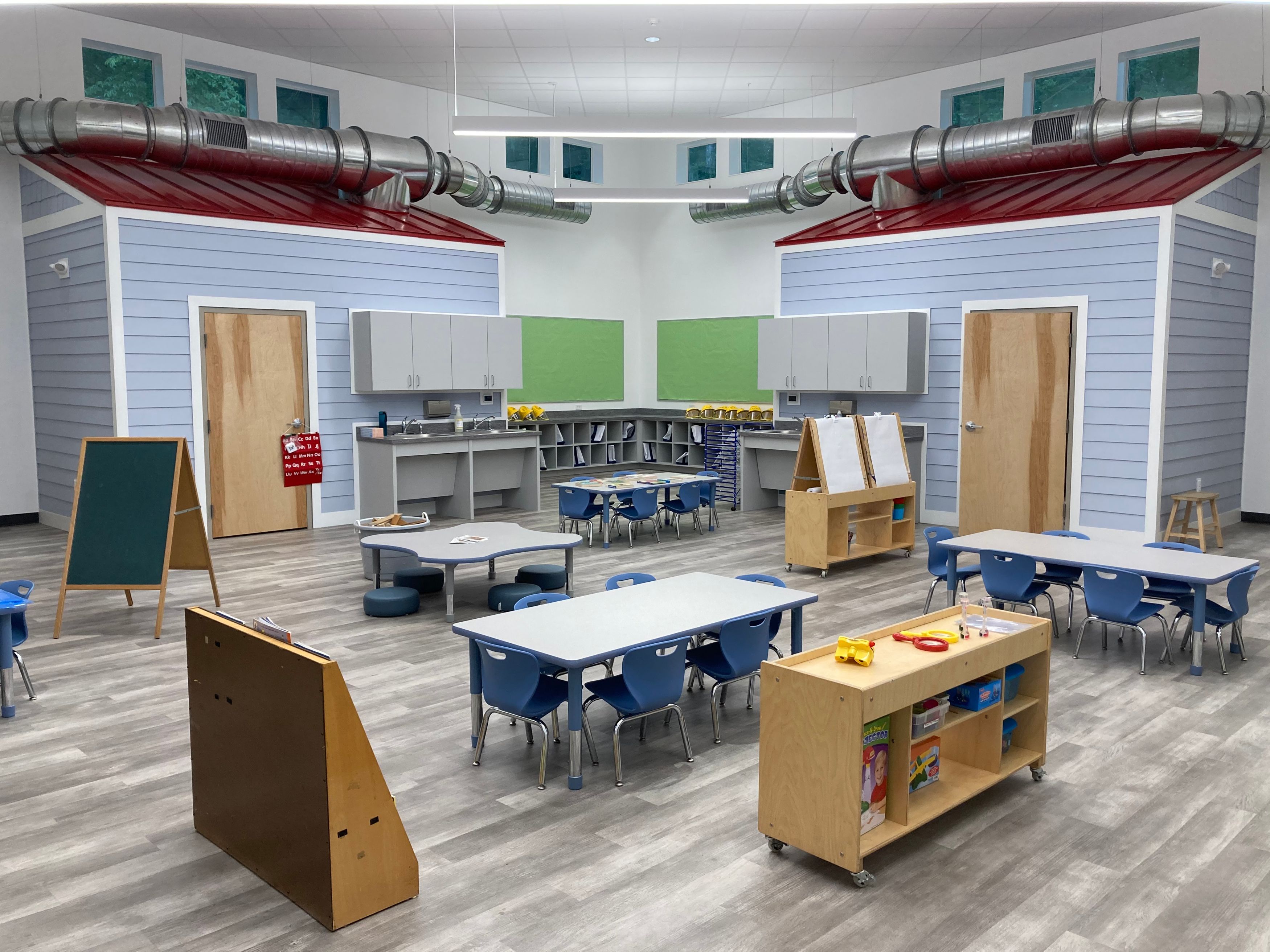 The new Preschool, Lower Elementary and Art building is now open to students for the upcoming 2020-2021 school year

The Cornerstone School launched the Cornerstone 2020: Full S.T.E.A.M. Ahead Capital Campaign in 2018 to raise the funds necessary to replace the remaining portables on campus with a new, multi-classroom building, complete with a Learning Lab and Art Studio. After months of fundraising and design meetings, the time had finally come in the summer of 2019.

Construction crews first began demolishing the old Kindergarten and Art portables. Lower Division head Jenni Hager, Kindergarten teacher Margarita Rossello and Head of School Ingrid Wasserfall all took turns taking a bite of the structures with the excavator, under the watchful eye of the A&A Demolition crew. In just a few weeks, the back of the campus was cleared and construction began.

After a wet summer and tons of dirt removal, a new drainage system was installed. New fill dirt was brought in and, in early December, the concrete foundation was poured. Construction moved quickly from that point and soon walls were in place and the roof trusses were being hoisted over the trees. Roof shingles followed, along with windows, doors, and drywall. While work on the building was delayed due to the pandemic, crews from Tallen Builders were still able to complete a majority of the project before the summer of 2020.

The 17,000+ square foot building will house students in grades Junior Kindergarten through Second Grade and includes the Emily K. Young Early Learning Lab (pictured below) and a brand new Art Studio for students in Kindergarten through Eighth Grade.
"It's going to be a great year in our new classroom," said Rossello. "I am very excited to move in." 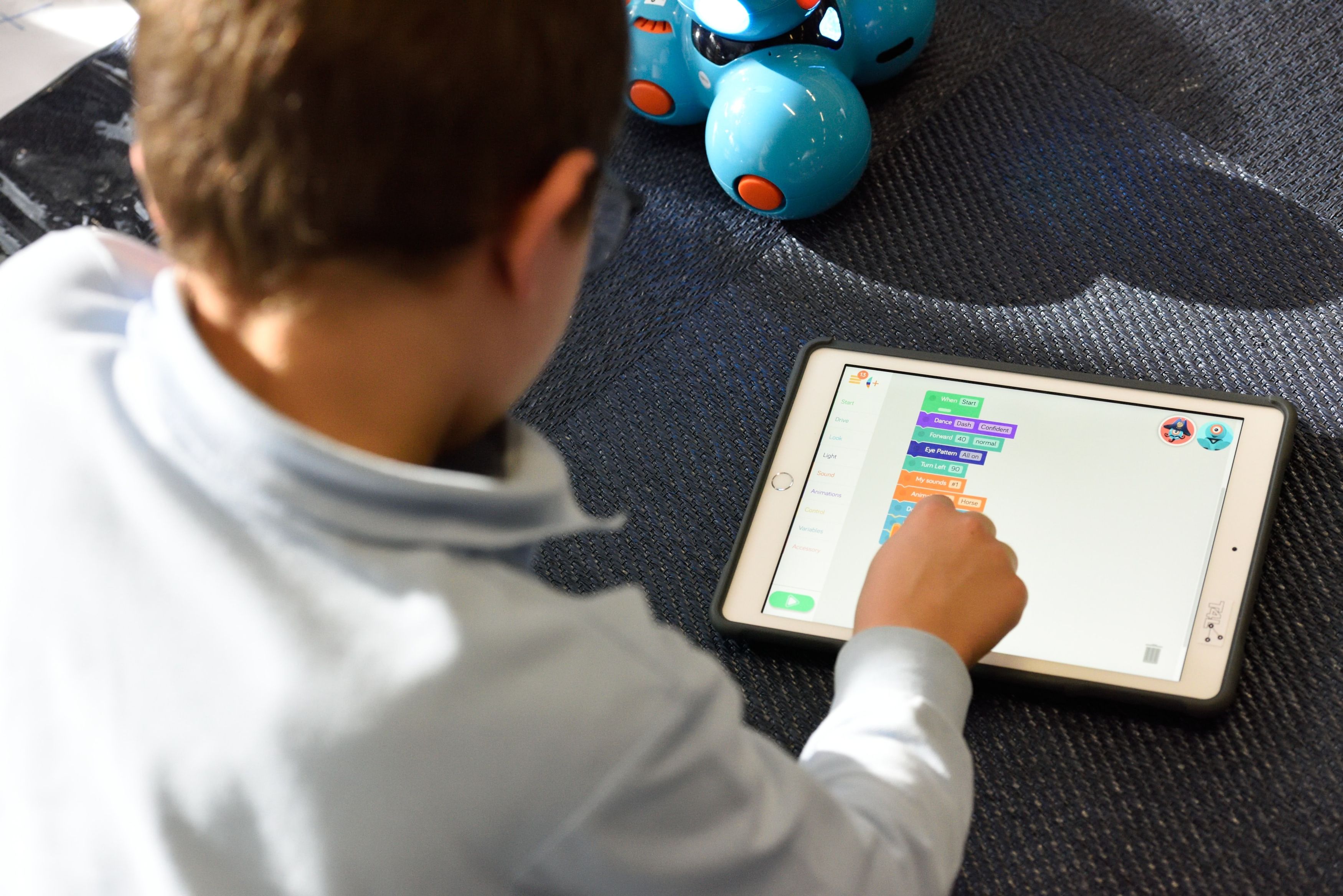 The Cornerstone School is now offering distance learning to our students for the spring semester. All currently enrolled families will receive further instructions on how to access their child's virtual lessons via email no later than March 23. For additional information, please contact your child's homeroom teacher or division head.

OWL BE SEEING YOU

Second Grade students learned all about the habitat of the North American Barn Owl, getting up close and personal with some of their prey...or what was left of them. 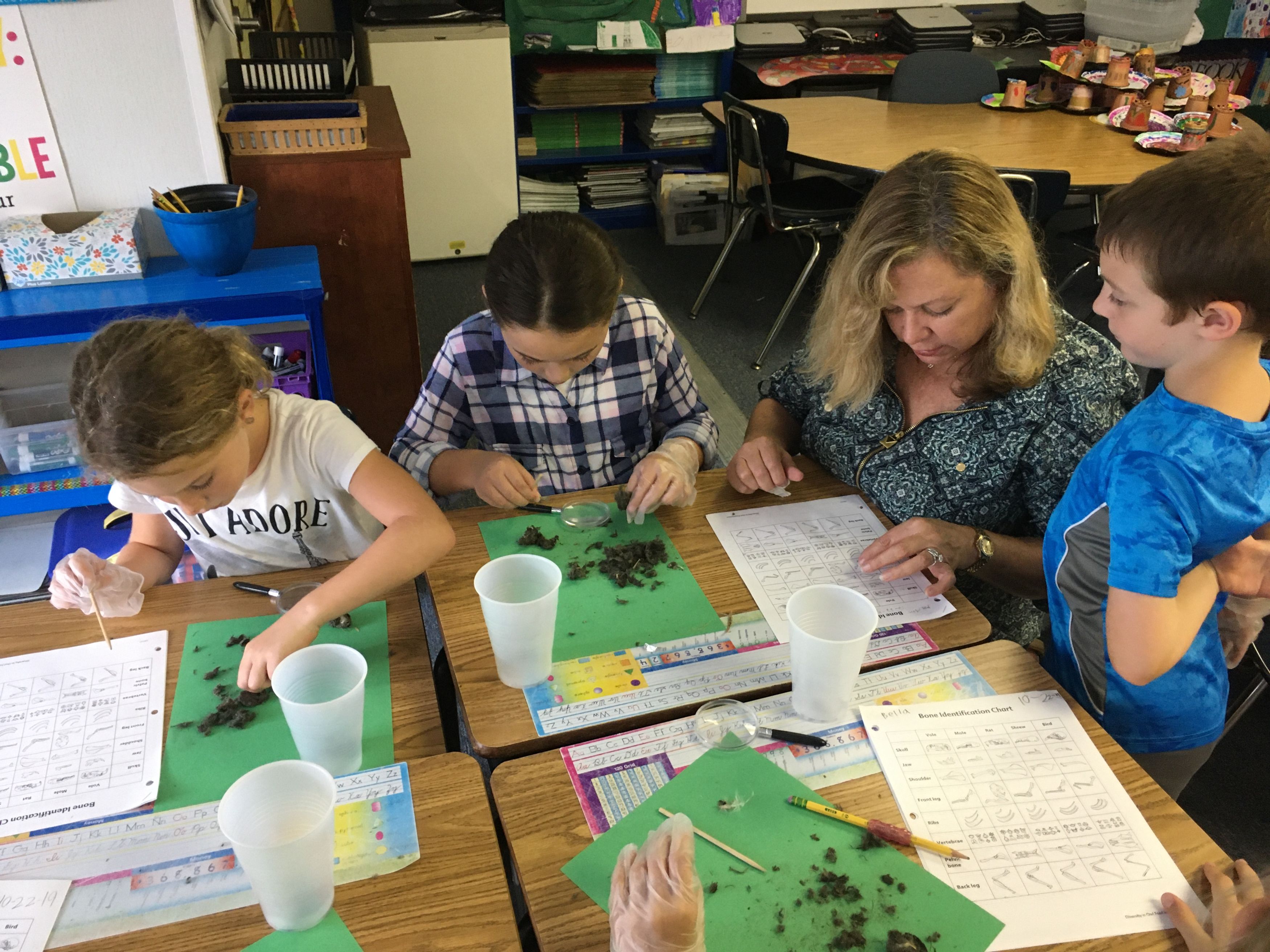 Not familiar with owl pellets? Neither were the students in Ms. Fuqua's Second Grade class until last semester when they came face-to-face with the brownish-gray orb. After swallowing their prey whole, Barn Owls will regurgitate the indigestible parts in the form of a small pellet. While it may seem disgusting, the owl pellet contains a story about the owl just waiting to be discovered.

Students in Ms. Fuqua's class began a new unit on “Living in Our Habitat" in the fall. The first part of the lesson began with the mighty oak tree, what lives in it, under it, and the cycle of its life. Students learned about the animals that call the oak home, including the North American Barn Owl.
Part of the unit includes learning about the diet of the barn owl and the dissection of owl pellets.

On a cool October morning, Ms. Fuqua passed out gloves, wooden scalpels and disinfected owl pellets to each of her students and explained the task at hand. After a few initial "ewws" and "ahhs", the students dove into their pellets. Some struggled a little to pick the pellet apart, but were amazed when a piece of bone began to emerge. Feathers, legs, ribs, and skulls. Each pick of the scalpel drew a new shriek of excitement. "The kids are so surprised they can pick it apart," said teacher assistant Cindy Shawley. "They are so excited about how many bones can fit into one pellet."

"The goal of this project is to help our students visualize how an animal's habitat can affect their diet," said teacher Lori Fuqua. "The owl pellet dissection is one of the projects my students look most forward to each year." 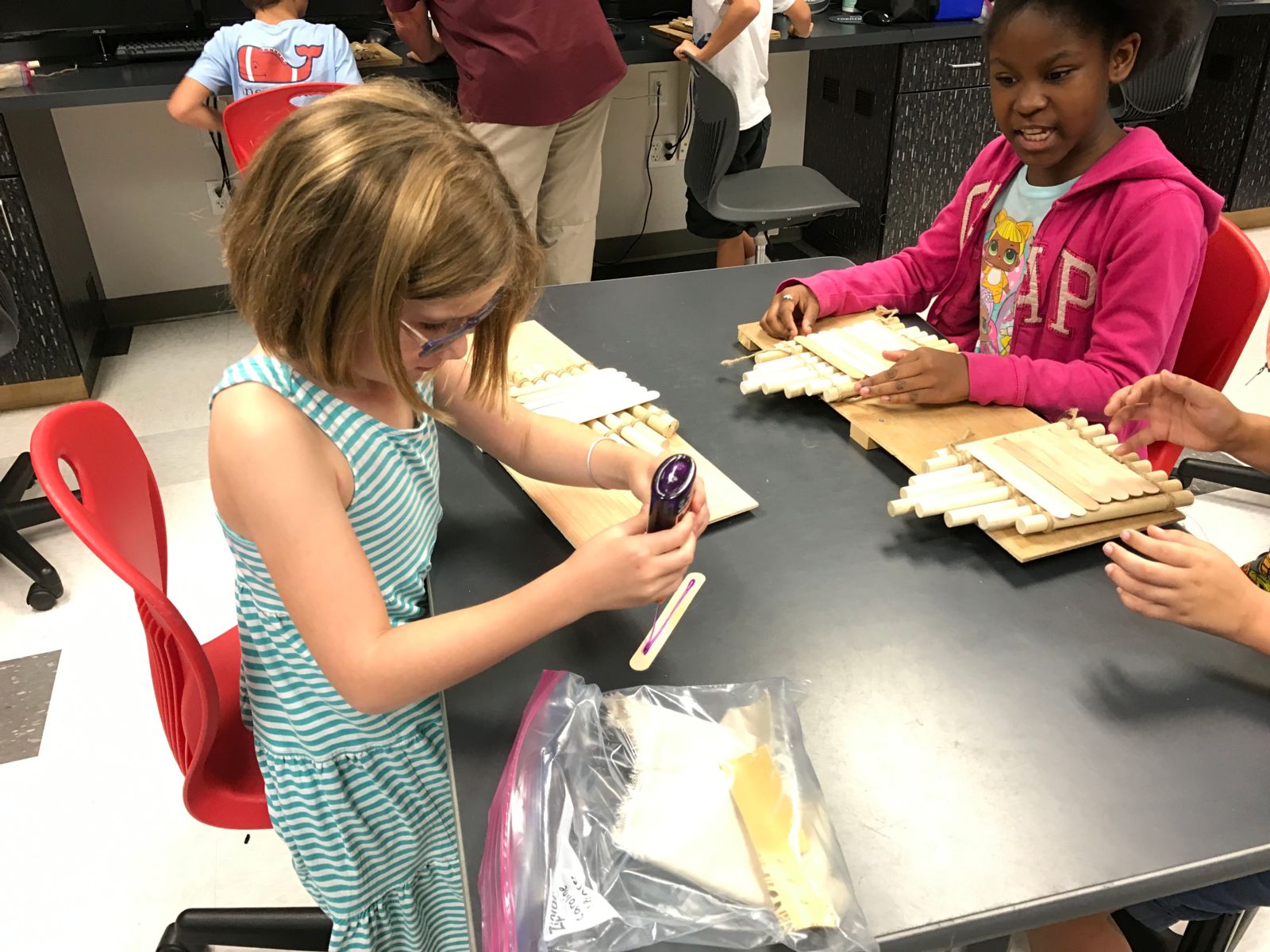 Third Grade Cornerstone students took their geography lesson to the next level and traveled across the Pacific Ocean, building wooden rafts inspired by the 1947 Kon-Tiki Expedition.

Dowels, check. String, check. Craft sticks, check. The Third Grade class had everything they needed to build their wooden rafts. But why? Students had been studying traditional geographical subjects, oceans, continents, etc. and how regions and cultures change over time. Enter the 1947 Kon-Tiki Expedition and an idea by STEM Coordinator Joe Moseley.

The Kon-Tiki Expedition, led by Norwegian adventurer and ethnographer Thor Heyerdahl, was a 5,000-mile raft trip that took six explorers across the Pacific Ocean in an effort to prove that ancient civilizations made long sea voyages, promoting the spread of cultures between different locations.
After extensive research by the Third Grade Class about the geography of the earth, Mr. Moseley decided to take the lesson one step further and tasked the students with constructing their own wooden rafts using limited materials. "The story of Thor Heyerdahl seemed to be a great way to learn about trans-cultural diffusion. While learning about Thor Heyerdahl we could better understand his challenges, ideas, and theories by looking at his historic Kon-Tiki voyage. While doing this, we also learned more about oceans, cardinal directions, maps, and more" said Moseley.

Over the course of four STEM classes, students designed, measured and built their rafts using wooden dowels, string, cloth, craft sticks and plenty of glue. Not only did the students gain a clearer understanding of the geography of the expedition area, but they also gained a better idea of the challenges of sailing across the ocean in a raft and what ancient peoples would have endured to make such a journey. The student designed rafts were on display on campus during September. The original Kon-TIki raft is on display at the Kon-Tiki Museum in Oslo, Norway. 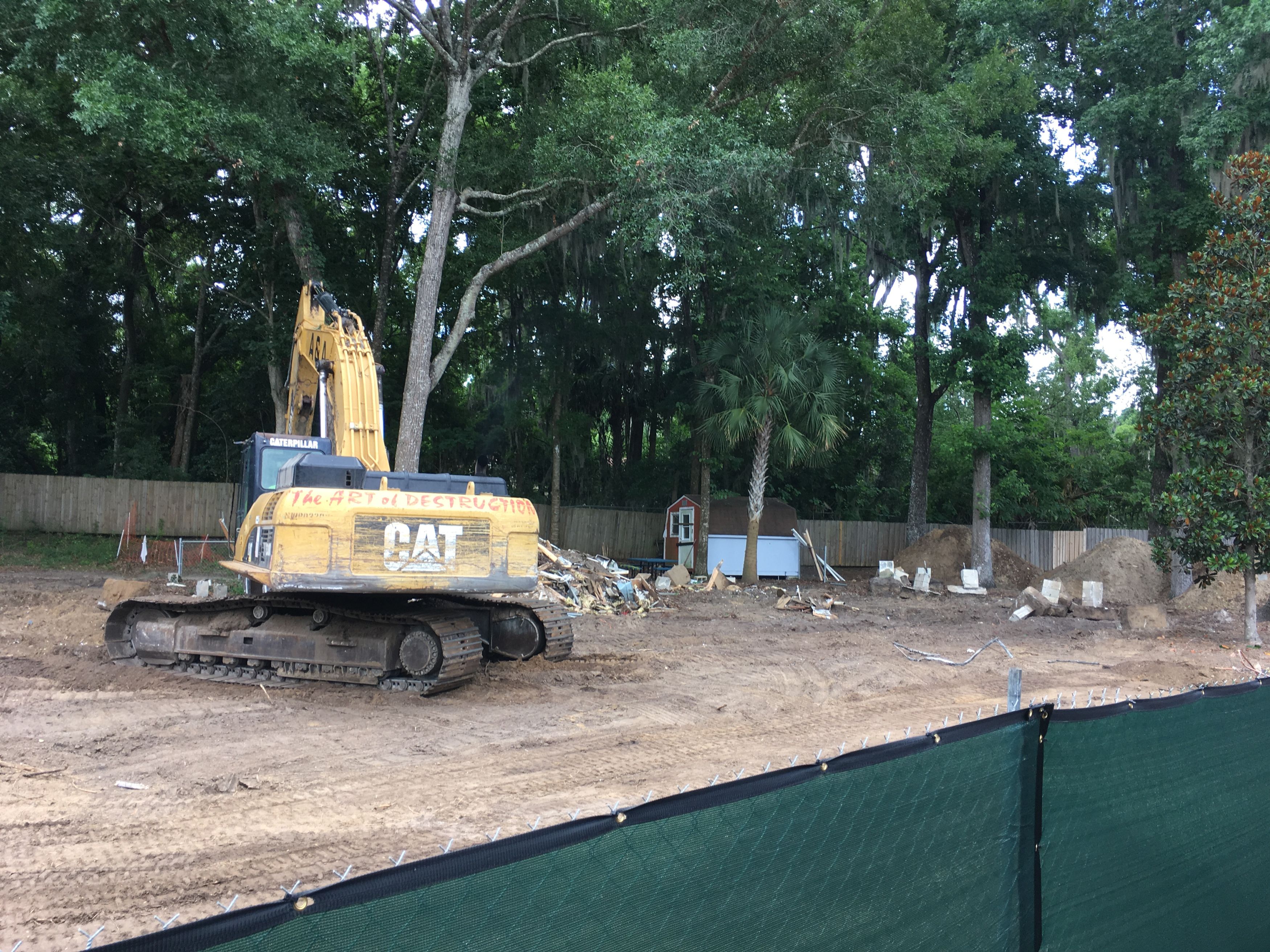 CONSTRUCTION BEGINS ON OUR NEW BUILDINGS

Lower Division Head Jenni Hager couldn't keep from giggling as she crunched the excavator down on the front of the empty Kindergarten portable. Ms. Hager, Kindergarten Teacher Ms. Margarita, Teacher Assistant Ms. Lacey, and Head of School Ingrid Wasserfall all took a turn crunching and smashing the portable that had stood on campus for the last twenty-six years.

After the fun was over, the professionals at A&A Trucking and Excavating took over to officially begin demolition of the back of campus. An estimated one hundred truckloads of debris will be removed from the area. Once the ground is cleared, crews will begin construction on the 17,000 square foot building that will house the Preschool, Lower Elementary and Art classrooms.

The building project is part of the Cornerstone 2020: Full S.T.E.A.M. Ahead Capital Campaign, which also includes enhanced Art and Athletics programs, and a new Multi-Purpose space. Construction is set to start in August and last through the 2019-20 school year. 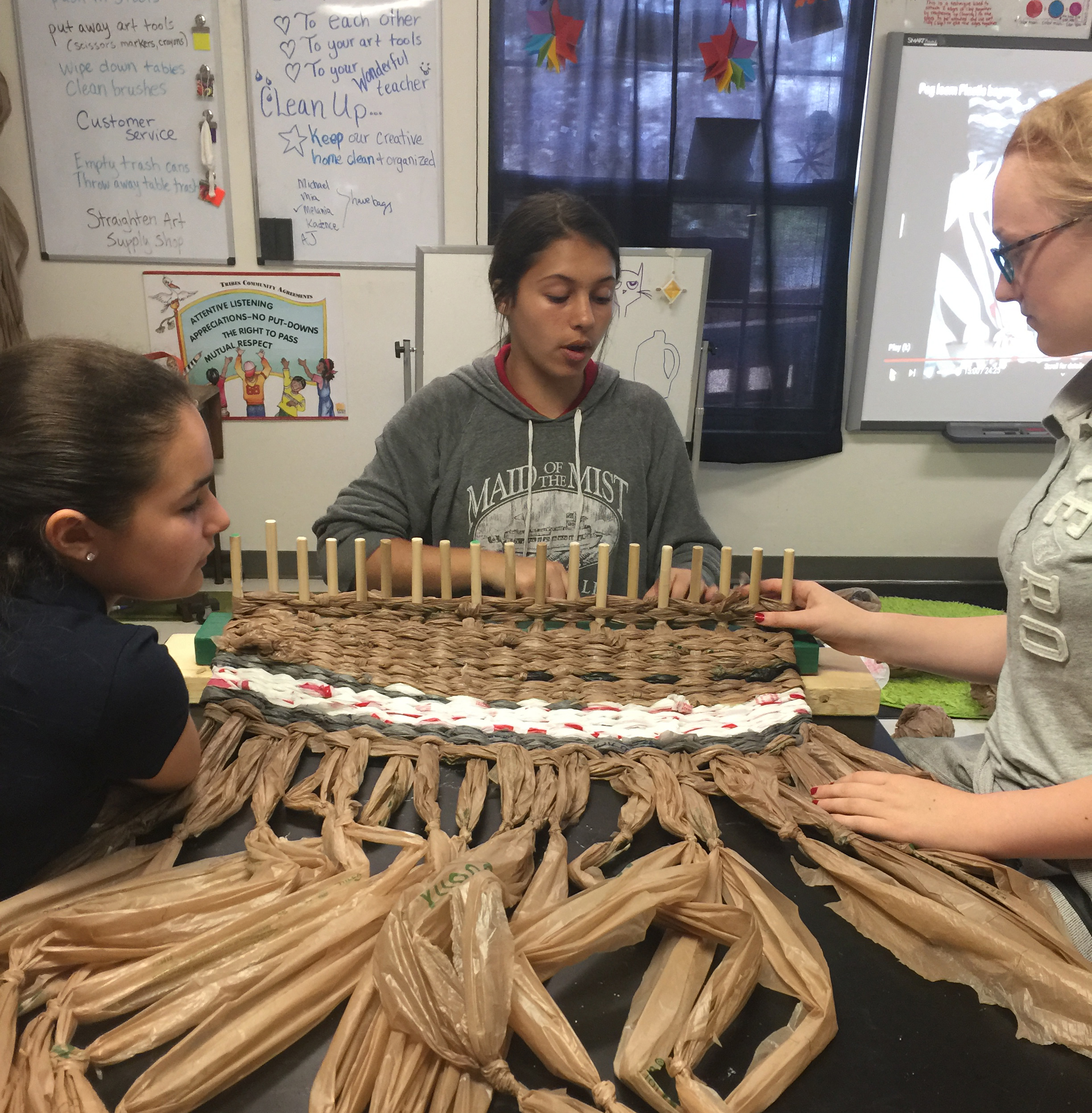 Art Teacher Hannah Gray found a way to make art and save the environment with the help of plastic bags.

It takes an estimated 1,000 years for a plastic bag to decompose. The thought of that wasn't far from Art teacher Hannah Gray's mind when she was looking into a STEAM project for her students. While doing research, she discovered something called "plarn". Think yarn, but made from plastic bags. Not only could this plarn make for some interesting art projects, it could also help the environment.

An all call was made to Cornerstone families and staff for all their plastic grocery bags and almost 3,000 plastic bags were collected. Over a period of two months, Kindergarten through Eighth Grade students prepared the plarn and used it in two separate STEAM projects.

Students in Third, Sixth, Seventh and Eighth Grades wove the plarn to create a full size teepee in front of the art room, as part of their study of Native American art and architecture. Seventh and Eighth Grade students used plarn to weave three plastic sleeping mats that were donated to a local homeless assistance program. The completed teepee and sleeping mats were on display on campus until mid-March.

STEM Coordinator Joe Moseley is always looking for emerging and interesting activities that will give the students at The Cornerstone School the opportunity to apply their STEM skills. 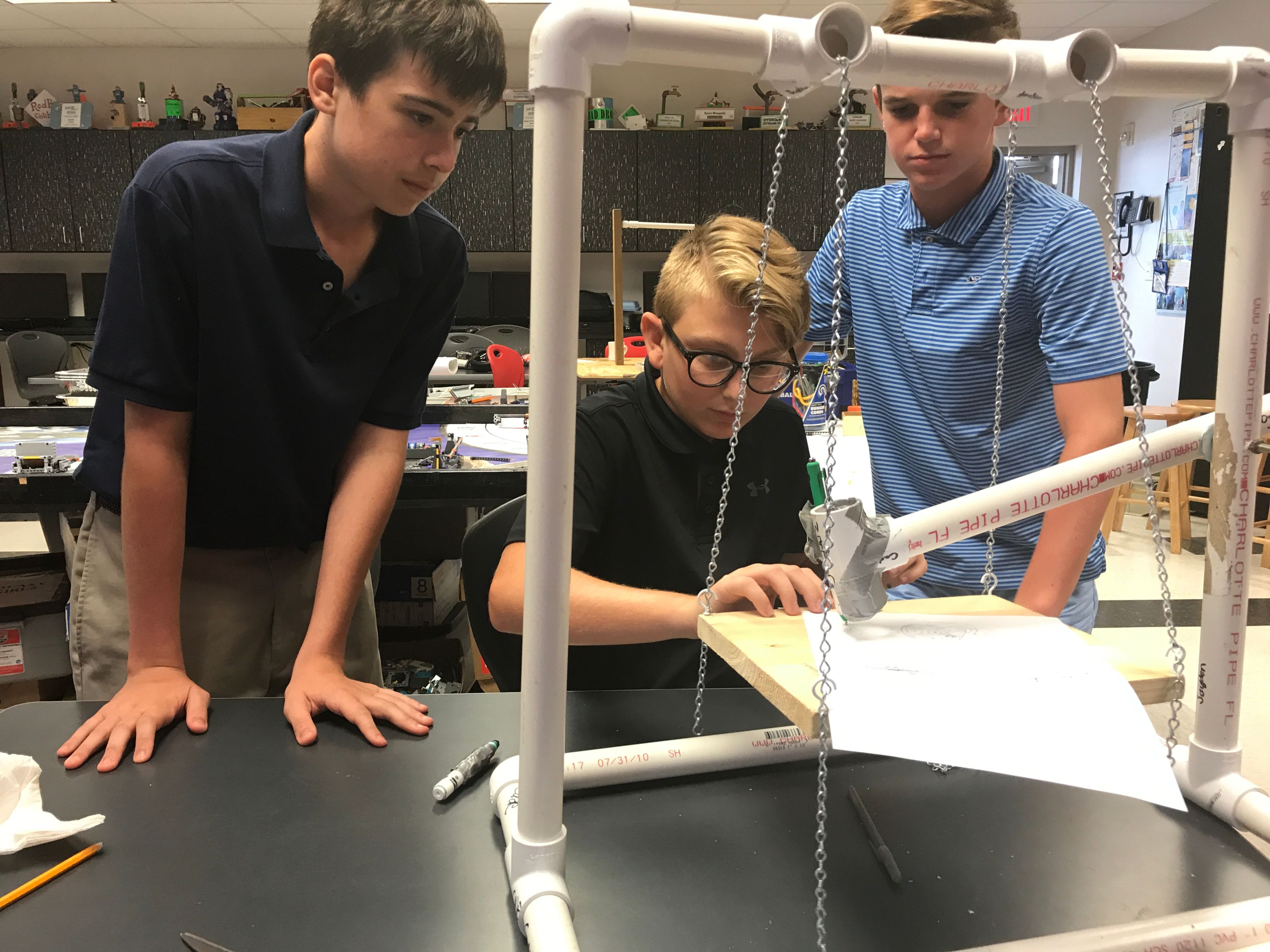 When Head of School Ingrid Wasserfall saw a demonstration of a harmonograph at Santa Fe College in Gainesville over the summer and showed the Administration Team, Mr. Moseley was inspired. Investigating deeper, he found that this would not only be an excellent STEM project, it would also be an even better STEAM project. "While the device provides a host of educational opportunities (math, engineering, physics, art, etc.) the primary focus of this project was
engineering and art," said Mr. Moseley.

For the first quarter of the year, Eighth Grade students constructed their own versions of a harmonograph. To begin, students broke into small groups and chose their materials. One group dared to take on the challenge of using sand, while the others stuck with a version of ink and
paper. The students researched, sketched, designed and measured until they had their machines mapped out. Mr. Moseley and retired Cornerstone Science teacher Mr. Ed Harrison assisted the teams in bringing the students' creations to life.

Trial after trial, the students measured and balanced to get the pendulums to sync. "The physics of pendulum mechanics are at the foundation of any harmonograph device. This is true with those created by our students," Mr. Moseley said. "How the pendulums fall in and out of phase is mesmerizing, like watching a dance." The harmonographs were displayed in late October for other Cornerstone students to view. "This is a great intro into geometry, arcs and angles. One of our students would like to parlay this into his middle school science project," said Moseley.

This past October, The Cornerstone School was awarded the 2018 STEM School of Excellence Award by the International STEM Education Association.

Mr. Joe Moseley, STEM Coordinator at Cornerstone, traveled to Branson, Missouri to accept the award on the school's behalf. Mr. Moseley was also an ISEA 2018 Mike Neden STEM Champion Award Recipient. The ISEA STEM Excellence Awards program honors schools who have implemented a comprehensive and integrated STEM education program. The Cornerstone School is one of three schools in the country and the only school in Florida to receive this prestigious award.

THE ART OF SCIENCE 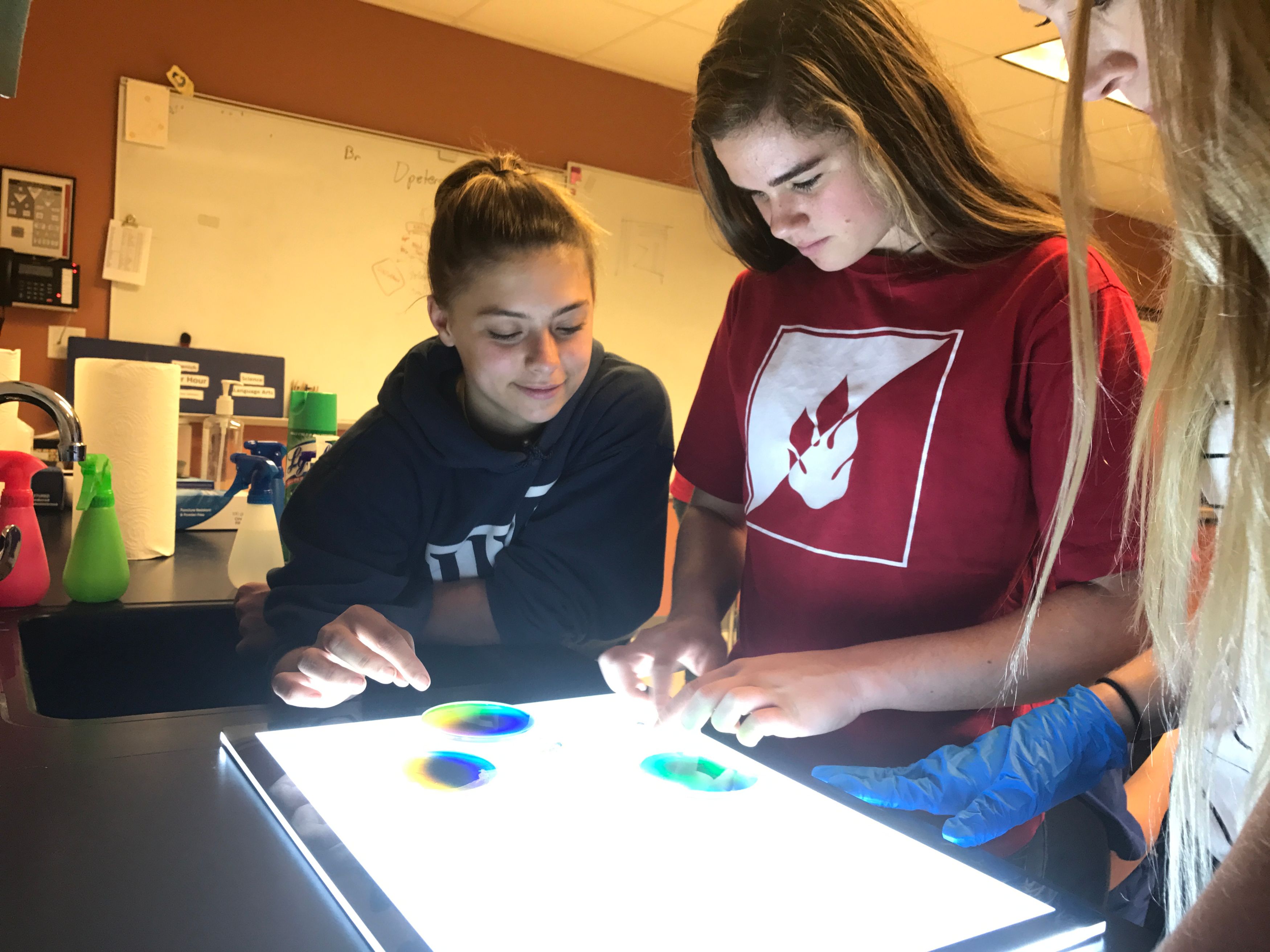 Middle School Science Teacher Dan Peterson comes up with unique science projects each year. Why? It keeps both Peterson and his students challenged and motivated to tackle new projects that correlate with his lesson plans. “At Cornerstone, we attempt to continually move forward and challenge our faculty and students to go beyond the normal curriculum,” Peterson said.

A goal this year was to integrate science and art. Peterson and Middle School Art Teacher Shanna Stiles meet once a month to come up with a new way to engage students, ultimately deciding on a project that uses bacteria as an artistic medium. “Our Science and Art instructors collaborate and choose projects that introduce another avenue of exploration for our students to find their own passion and direction into the world of science,” Peterson said.

Blood agar plates donated by Ocala Regional Medical Center were used to test and identify different types of bacteria. Students used additional dyed agar plates of green, violet, blue and other colors, streaked with bacteria to create their masterpieces. Bacteria test plates grew at a temperature of 78-82 degrees and plates incubated over a period of 8 days, creating amazing pieces of artwork. Students learned differences between cells and the role of bacteria in everyday life all while allowing them the opportunity to express themselves through color and movement. ‘We wanted to expose our students to concepts they will see in high school and college in a way that was not intimidating,” Peterson said. “This was a way to get the students interested and passionate about science and art.”